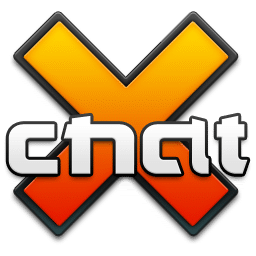 XChat is an IRC chat program for both Linux and Windows. It allows you to join multiple IRC channels (chat rooms) at the same time, talk publicly, private one-on-one conversations etc.

X-Chat is a full-featured IRC client and includes all basic functionalities that are found in most other IRC clients, including CTCP, DCC file transfers and chats.

Also it has a plugin system for various languages (including at least C or C++, Perl, Python, Tcl, Ruby, Lua, CLISP, D, and DMDScript). By writing plugins, one can extend the features and customize the functionality of X-Chat.

X-Chat has two good features of usability: colored nicknames and alignment by text as opposed to alignment by nicks. When you read text, it's enough for eyes to notice the colors of nicknames, which they can do when they are focused to somewhere else near, and you may know at once who is writing. Colors are inobtrusive and there just 6 of them - not to burden your short-term memory. And eyes don't have to search for ends of nicknames, they can start reading text at once when text is aligned by the beginning.