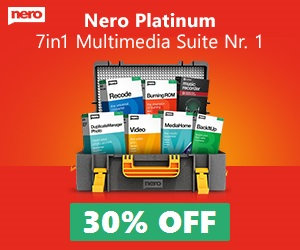 DVDFab 12 is the most powerful and flexible DVD or Blu-ray copying, ripping, creating and burning, all-in-one software. Also it’s a fantastic file converter which can rip and convert DVD/Blu-ray movies. Further, it can transfer your files to various portable devices.

This DVDFab All-In-One software is simply the easiest way to copy a DVD and Blu-ray movie. It can copy any DVD, Blu-ray disc with Cinavia watermark. Supports all popular video and audio formats, HD video and almost all multimedia devices.

BUY NOW selected DVDFab Products – up to 50% OFF

In addition, it can create a protected disc (BDMV-REC) to disable Civania for playback on PS3. Your entire movie is copied to a single DVD or Blu-ray with just one click, and everything happens automatically. Also with including menus, trailers and special features.

In DVDFab 12, graphical user interfaces get a complete new outlook. Icons, buttons, tabs, dialogs, all get improved and optimized for best efficiency and aesthetics. Besides, the first time in the history of DVDFab, user-defined skins eventually become a reality. You will able make your DVDFab program the way you want, stylish, reminiscence, majestic, etc. Your style. Your choice.

The redesigned task manager presents you all the current tasks and the most recent tasks in one place. The detailed status of each task, ready to start, processing, wait in queue, success, failed, cancelled, not processed, exit unexpectedly, etc, all at a quick glance.

As the 32-bit OS gradually loses its aura, the prevailing of 64-bit becomes irresistible. DVDFab 10 surely takes that advantage to help you get the most of your system, by utilizing the 64-bit technology while encoding H.264 and H.265 sources.

The redesigned UI layouts based on the completely new architecture and framework also lay solid foundation for DVDFab 10’s stability.

Word’s top-ranking DVD and Blu-ray backup tools, including DVD Copy and Blu-ray Copy, dedicating to providing the leading service to copy and backup any DVD, Blu-ray disc, ISO, Folder without losing quality in a flash speed.

The most full-featured ripper tools including DVD Ripper and Blu-ray Ripper. They can read and rip all DVDs and Blu-rays to any mainstream video and audio formats or devices with various settings to make the output video fit your need.

World’s cutting-edge universal conversion tools including Video Converter, Blu-ray to DVD Converter, DVD to Blu-ray Converter, capable of converting between videos, between DVD and Blu-ray, with a sea of profiles for your consideration.

World’s first complete Cinavia solution: DVDFab CinaviaRemoval HD, dedicating to helping you get completely rid of the hard-to-conquer Cinavia protections embedded in the audio track of any Cinavia protected disc.

Blu-ray Copy is the first full-featured Blu-ray copier, burner, cloner powerful enough to copy any Blu-ray to any Blu-ray, DVD, AVCHD disc (with BD format, and only can be played on BD player) or to your hard drive with just one or a few clicks.

BUY NOW selected DVDFab Products – up to 50% OFF